Blog : Should You Give Money To Homeless People? 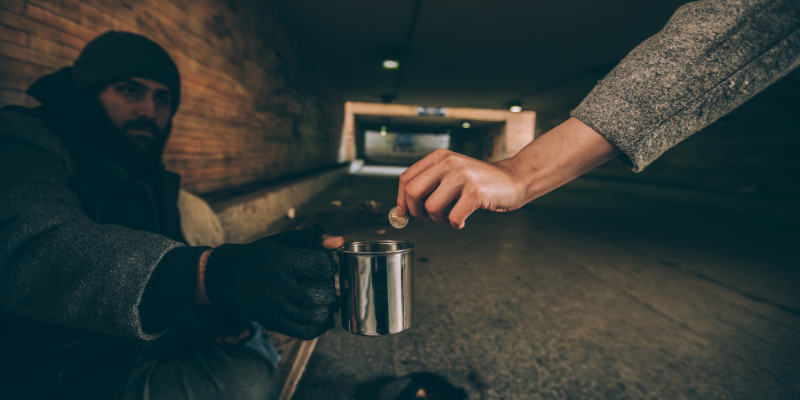 Overall, Shelter estimated that 280,000 people were homeless in England as of December 2019 with no equivalent figures for Scotland and Wales. But there are various measures to take into consideration.

The numbers of rough sleepers increased by 36% year on year between April and June 2020, which is thought to be a direct result of the pandemic.

So with the increase of people on the streets in our towns and cities, is it right to give someone who is homeless money?

Some will say you shouldn’t as this will feed their addiction and prolong their homelessness.  Others say you shouldn’t because you don’t know who is homeless and who is pretending to be homeless to make quick cash to buy drugs and alcohol.  Other groups say you should give money to help homeless people buy essential items such as toiletries, medicine and clothes. The Salvation Army says “The views of charities and homeless support groups are mixed.”

Many people believe people are on the street just because of drugs and alcohol abuse.  But a spokesperson for The Independent said: “The causes of homelessness are very varied. Often there are several reasons why someone becomes homeless – from relationship breakdown to mental health issues or job loss. Drugs and alcohol can play a part in homelessness, but it often comes as a result of becoming homeless.”

When it comes to people pretending to be homeless let’s be honest, for someone to have a warm flat but decide to put on old clothes get out on the freezing pavements begging for money just so they can get the next hit you would have to be out of your mind. There is only a small majority of people out there doing this. The vast majority want to get back to normal living and enjoy the home comforts the rest of us do.

I would say if you can afford to give money to a homeless person on the street, do it. That person may need that money to buy a jumper or stay in a hostel (anywhere up to £20-odd a night.). We are told lots of stories to make us think again, but if I gave a pound to a charity, I don’t always know how much of that money actually goes to the person on the street. There are some amazing long term options like the ethical investment options that Green Pastures offers, where all your investment is used to buy property for homeless people, but to help the person standing or sitting in front of you in the immediate, we have to use our common sense. If someone is high on spice, don’t give them money but if someone is not and they look sober and if your heart goes out to them then give what you can.  If you feel uncomfortable with that buy them a sandwich, coffee, pair of gloves or whatever they think they need.  Ask them, “what can I get you?”.

The worse thing you can do is ignore someone. Say hello, help if you can, don’t make a homeless person feel invisible, make sure they know they have been seen.